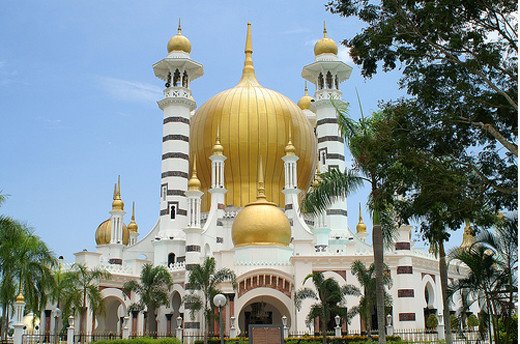 Makarios – the Blessed: In Greek version of the authorised Gospel of Matthew (5:3-12), the name of the Prophet Muhammad (Peace Be Upon Him) appeared as “Makarios”, which means blessed one. Jesus prophesied and said according to Matthew in his sermon, which is known as “Beatitudes” in the Christian history. “Makarios is you when they revile and persecute you, and say all kinds of evil against you falsely for My sake. Rejoice and be exceedingly glad, for great is your reward in heaven, for so they persecuted THE PROPHETS WHO WERE BEFORE YOU” (Matthew 5:11-12) –  (See: William Barclay, The Gospel of Matthew, Vol. 1, Revised Edition, The Daily Bible Series, Westminster John Knox Press, Louisville, Kentucky, 1998, pp.83-118; also see William D. Mounce. Interlinear for the Rest of Us: The Reverse Interlinear for New Testament Word Studies, Zondervan, Grand Rapids, 2006, p.9-11).

This interpretation cannot be wrong as Jesus (Peace Be Upon Him) here calling the one as Makarios in Greek version to be persecuted like other “prophets who were before you” that means the Makarios himself is the prophet. However, our argument is that Jesus actually used the proper name of the Prophet Muhammad (Peace Be Unto Them), “MUHAMMAD /AHMAD” in his native language of Aramaic as “MUHAMMAD”

, which later has been substituted to the Greek form as “Makarios”, which means blessed.

“And [remember] when Jesus son of Mary (Peace Be Upon Him) said: O Children of Israel! Lo! I am the Messenger of ALLAH unto you, confirming that which was [revealed] before me in the Torah, and bringing good tidings of a Messenger who cometh after me, whose name is the Ahmad (Peace Be Upon Him). Yet when he hath come unto them with clear proofs, they say: This is mere magic” – (Quran 61:6).

– Ahmad/Hamada/Hamid: Prophet Muhammad’s (Peace Be Upon Him) name as AHMAD/HAMADA/HAMID also appeared so many times in the Hebrew Tanakh.

For an instance, it is prophesied of him.

“I will shake all the nations, and HAMADA [AHMAD] shall come for all the nations: and I will fill this house with glory, says the Lord Almighty” –  Haggai 2:7. [See: KJV, NIV, NLT, Leixkon Biblion]