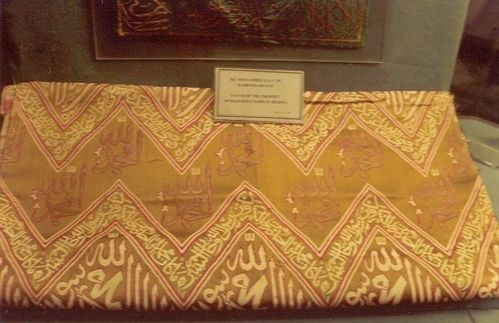 3. Mahmud – the Praiseworthy also Beloved and Laudable by ALLAH: As ALLAH says, “Soon will thy Lord raise thee (O Muhammad, on whom be peace) to a Station of Praise and Glory” – (Quran 17:79).

– Mahmud: Prophet Jeremiah acknowledged the name of the Prophet Muhammad (Peace Be Upon Him) as Muhammad and Mahmud and he beseeched ALLAH when the Israelites had forsaken the law:

“All the people moan, they seek bread; they have given up Thy (beloved) MAHMUD, Thy MUHAMMAD, for food to refresh the soul (for worldly greed). ‘See, O Lord, and behold how abject I am become’ – Lamentations 1:11. [See:  GW, Gill’s Exposition, Leixkon Biblion].

4. Nabi – the Prophet of ALLAH: Prophet Muhammad (Peace Be Upon Him) is the Prophet of ALLAH after whom there will be no prophet. In history according to the Quran, ALLAH sent Prophet to every nation: “(All) people are a single nation; so ALLAH raised prophets as bearers of good news and as warners” – (2:213) and Prophet Muhammad (Peace Be Upon Him) is the seal of the Prophethood: “O Prophet (Muhammad, on whom be peace)! Surely, We have sent you as a witness, and as a bearer of good news and as a warner. And as a summoner unto ALLAH by His permission, and as a lamp that giveth light” – (Quran 33:45-46).

5. Rasul – the Messenger and Apostle of ALLAH: Prophet Muhammad (Peace Be Upon Him) is the Messenger of ALLAH and Seal of the Messengership and Apostleship. There will be no prophet and there will no messenger after him as such and he is the seal of it. Indeed, ALLAH says: “Muhammad (Peace Be Upon Him) is but a Messenger, Messengers (the like of whom) have passed away before him. If he died or were slain, will ye then turn back on your heels? If any did turn back on his heels, not the least harm will he do to ALLAH; but ALLAH (on the other hand) will swiftly reward those who (serve Him) with gratitude. No soul can ever die except by ALLAH’s leave, the term being fixed as by writing. If any do desire a reward in this life, We shall give it to him; and if any do desire a reward in the Hereafter, We shall give it to him. And swiftly shall We reward those that (serve us with) gratitude. And how many a Prophet has fought with whom were many worshippers of the Lord; but they never lost heart if they met with disaster in ALLAH’s way, nor did they weaken (in will) nor give in. And ALLAH Loves those who are firm and steadfast” – (Quran 3:144-6).

– Rasul – the Messenger: Prophet Muhammad (Peace Be Upon Him) has been prophesied in the Book of Malachi (3:1-2) as “Rasul” in Hebrew