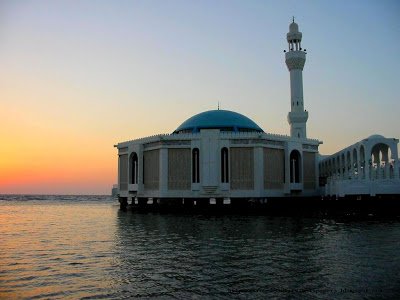 Aksa), from [this blessed place] where Prophet Mohammad (PBUH) accompanied by Angel Gabriel, had made a Night Journey to the Throne of God. “Glory be to Him Who did take His servant for a journey by night from the sacred sanctuary to the furthest sanctuary whose precincts We did bless” – (The Koran Sura Al-Isra 17:1). According to Talmud, it was from the place of Temple mount that God gathered earth, to create Adam…The Bible recounts that Jacob dreamt about angels ascending and descending a ladder while sleeping on a stone, which according to Talmud took place on the Temple Mount and according to Jewish tradition was on the rock in the Dome of the Rock. According to the Bible, King David purchased a threshing floor owned by Aravnah the Jubusite…(2 Samuel 24:18-25). “Then Solomon began to build the Temple of the Lord in Jerusalem on Mount Moriah (2 Chronicles 3:1)” – (One God in One Man, AuthorHouse, Bloomington, 2007, pp.204-5).

“It is the single line” avows also Steven Fine “description (Quran 17:1) of Muhammad’s (PBUH) miraculous Night Journey from the “sacred shrine,” very likely the Meccan Haram, to the “the distant shrine” (al-masjid al-aqsa). This latter may refer to Jerusalem…Muhammad (PBUH) was carried by God’s power from Mecca to the Temple Mount in Jerusalem. And back…”

“By the time the Muslims took Jerusalem….[they] quickly chose instead to build their house of worship on the cleared southern end of the Temple Mount. The Mosque was called” – (The Temple of Jerusalem, BRILL, Leiden, pp. 177-8; 153).

It was the promise that was fulfilled that with the coming of the Prophet Muhammad (Peace Be Upon Him) and with his kingdom the second destroyed Temple of Solomon (Haikal E Sulaimani) will be rebuilt to the eventual establishment of the everlasting kingdom of Islam – (See: Daniel 12).

“The Qur’an” adds Jon Douglas Levenson “for example says of God, “He did not beget and is not begotten” (112:3) – words that, significantly, appear along with kindred verses on the outer and inner faces of the Dome of the Rock (the Temple of Solomon), the Great Islamic Shrine that has dominated the skyline of the Old City of Jerusalem for more than thirteen hundred years. Sidney H. Griffith, a scholar of Christianity under Islamic dominance, puts it well: ‘The import of these repeated Qur’anic phrases is crystal clear: ‘Islam has supplanted Christianity even in Jerusalem on the Temple Mount where previously Christians had seen the signs of their own succession to the Jews.” Having wrested Jerusalem from the Christians, Islam triumphant corrects what it judges to be the grave theological error central to the defeated religion. The True God is not a father Who begets nor is He a son Who is begotten. Nor is He in any way three” – (Inheriting Abraham: The Legacy of the Patriarch in Judaism, Christianity, and Islam, Princeton University Press, Princeton, 2012, pp. 177-8)