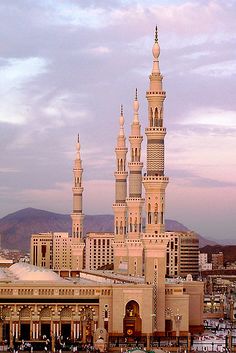 Prophet Muhammad (Peace Be Upon Him): The First Creation of ALLAH page 124

“The Prophet Muhammad’s (on whom be peace) being a mercy to all is linked to the fact that he is the intermediary of the Divine outpouring over all contingencies [i.e. all created things without exception], from the very beginning” – (Mahmud al-Alusi (1802 – 1854), The Exegesis Of the Holy Qur’an, entitled Ruh al-ma`ani, Beirut edition). Further, Enoch reported to have said that God said to me “All these things which you have seen happen by the authority of His Messiah so that he may give orders and be praised upon the earth” (I Enoch 52.4).

His light was the first of all the things created by ALLAH, as stated by the Prophet Muhammad (on whom be peace) himself that: “The first thing ALLAH created was the light of your Prophet, O Jabir (may ALLAH be pleased with him)” – (Sahih) and further he said in his other statement: “ALLAH is the Giver and I am Al-Qasim (i.e. the distributor)” – (Bukhari) – (al-Alusi, op. cit.).

Once the Holy Prophet Muhammad (Peace and blessings of ALLAH be upon him) asked angel Gabriel, “‘Did you see (me), before ALLAH put me in (my) body, a star over His throne?’ Gabriel answered, ‘All the angels have seen this great star which illuminated all the heavens with its light, and every light on every side shined forth from that star above the throne. For five thousand years before the creation (in the view of ALLAH, one day is equal to five hundred years), we saw that star above the throne of ALLAH'” (Adam: the Caliph of ALLAH, Sidi Muhammad Press 2004, Petaluma, CA).

Sayyid Abu al-Hasan Ahmad ibn `Abdullah, d. 3rd c. in his book al-Anwar fi mawlid al-nabi Muhammad `alayhi al-salat wa al-salam (p.5 of the Najaf edition) cites the following Hadith from Caliph Ali (may ALLAH be pleased with him): “ALLAH was there and there was nothing with Him, and the first thing which He created was the light of His Beloved Prophet Muhammad (ALLAH’s blessings and peace be upon him), before He created Water, or the Throne, or the Footstool, or the Tablet, or the Pen, or the Paradise, or the Fire, or the Veils and the Clouds, or Adam and Eve.”

The Rabbis hold the view and affirm that every letter and writing of the Torah enveloped the signs of the coming of King Messiah, directly or indirectly. “I may remark then, that our Rabbis with one voice accept and affirm the opinion that the prophet [Isaiah] is speaking of the King Messiah, and we ourselves shall adhere to the same view,” said Rabbi Mosheh El-Sheikh (commonly known as “Alshech”, who was Chief Rabbi of Safed and a disciple