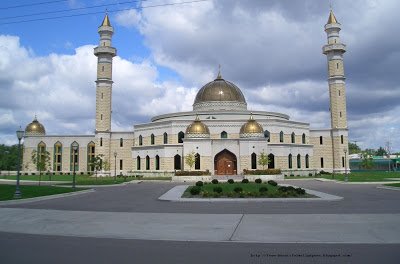 having four doors – one was called Adam’s door, another Abraham’s door, the third Ishmael’s door, and the fourth Mohammed’s door (Peace Be Upon Them)” – (Rev. S. B. Gould. Legends of the Patriarchs and Prophets and Other Old Testament Characters, James B. Millar & Co. 1884, Harvard University, pp. 22; 55).

“When at last” also affirms Gustav Weil “the whole universe grew loud with lamentation, and all created beings, from the smallest insect up to the angels who hold all worlds in one hand, were weeping with Adam, ALLAH sent Gabriel to him with the words which were destined to also save the Prophet Jonah in the whale’s belly:

“There is no God besides Thee. I have sinned: forgive me for the sake of Mohammed, Thy last and Greatest Prophet†, whose name is engraved upon Thy Holy Throne.”

“As soon as Adam had pronounced these words with penitent heart, the portals of Heaven were opened to him again and Gabriel cried, “ALLAH has accepted thy repentance. Pray to Him, and He will grant all thy requests, and even restore thee to Paradise at the appointed time” – (The Bible, the Koran, and the Talmud, Harper & Brothers, New York, 1885, pp. 35-36).

“One day, while traveling north, one of the Arab tribes from Mecca met a hermit in the desert. Some of the men stopped to speak with him. Hermits were known to be wise and the Arabs often sought their advice. The hermit asked where they had come from. When they replied that they were from Mecca, he told them that ALLAH would soon send a Prophet who would come from their people. They asked the name of this Prophet and the hermit answered that his name would be Muhammad (on whom be peace) and that he would guide them to a new way of life” – (The light of Prophet Muhammad (Peace and Blessings be upon him), CIMS, Alexandria– Egypt, pp. 11-12.).

“Aminah, mother of ALLAH’s Chosen One”, says Dinet Etienne “spoke thus:  ‘Since the day I carried my son in my womb until I brought him forth, I never suffered the least pain. I never even felt his weight and should not have known the state I was in, if it had not been that after I conceived and was about to fall asleep, an angel appeared to me, saying: ‘Dost thou not see that thou art pregnant with the Lord of thy Nation; the Prophet of all thy people? Know it full well. ‘At the same instant, a streak of light, darting out of my body, went up northwards, even unto the land of Syria. When the day of my deliverance came due, the angel appeared to me again and gave me a warning: ‘When thou shalt bring forth thy child into the world, thou must utter these words: ‘For him I implore the protection of ALLAH, the Only One, against the wickedness of